How wrong is the Young Earth Creationist age for the Giant's Causeway?

I've made a couple of posts recently about the National Trust having a part of their Giant's Causeway visitor centre exhibit that mentioned the Young Earth Creationist (YEC) belief that the causeway was created during the Flood, rather than approx. 60 million years ago as the scientific evidence supports - first, in support of the National Trust and then revisiting that support in the light of more information.

For balance, and just to emphasise my general lack of support for the YEC position, I want to highlight why so many scientists (including me) get upset if Young Earth Creationism is ever presented as science. There is no scientific controversy over the age of the Giant's Causeway or the Earth, at least not at the level of disparity that YECs are talking about. Opinions may differ by a few million years - it is not possible to date with zero margins of error - but this is not the same as saying that a "Biblical" Young Earth or "Flood Geology" has any scientific support at all. It simply doesn't.

Just in case there is any confusion about just how wrong the Young Earth Creationist position is, here is a MapTime illustration (click to enlarge) of the age of the Earth using the journey from St Patrick's Cathedral in Dublin (as an arbitrary famous landmark) to the Giant's Causeway (or as close as you can get by road). Taking the driving route recommended by Google, this is a journey of 263.14km. 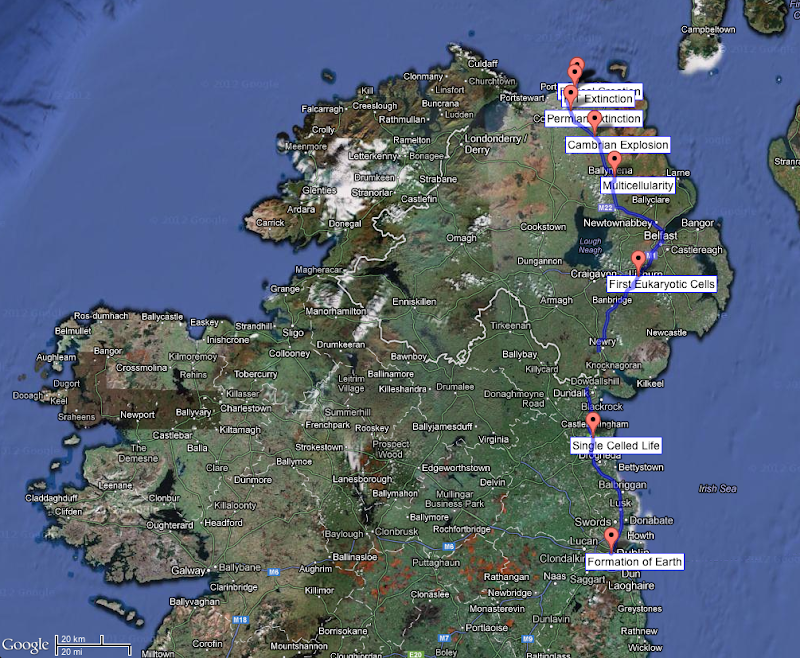 The current implementation of MapTime only supports one TimeLine, so I was not able to plot exactly the Biblical Flood at 4359 years ago or the geological age of the Causeway at 50-60 million years ago but I have left the earliest writing (5000 years ago) and the K/T Extinction (65 mya) marked.

There are couple of things to notice. One, is that even though the Giant's Causeway seems old to us - and over 10,000 times older than YECs claim - it is actually quite young by Earth standards and would not appear on the journey from Dublin until just past Bushmills, about 2.51km - 3.13km south of the Causeway: 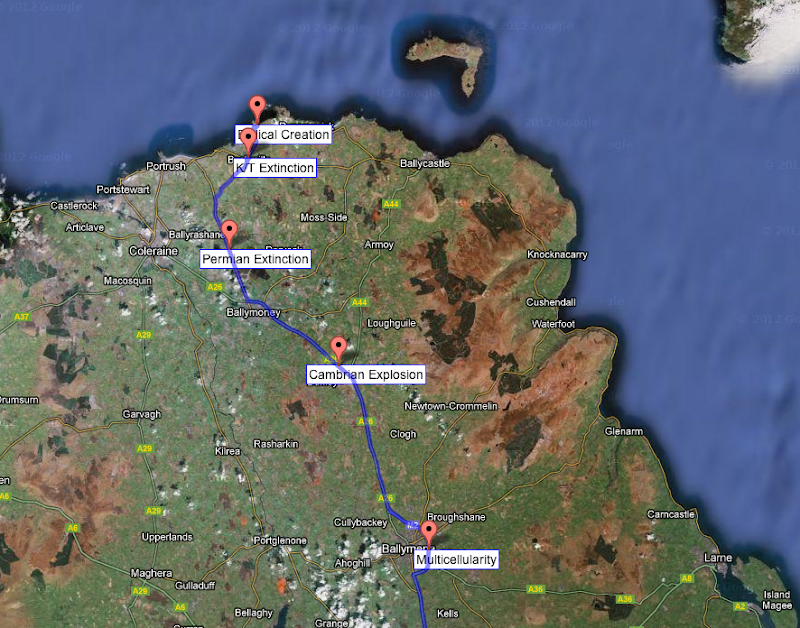 The Earth is old.

The second thing is not so clear from the map but can be gleaned from the table of distances, below: if I was to put my size 11 foot down, I would have already over-shot the Biblical flood, which lies about 25.3 centimetres away, by a few centimetres. Literal Biblical creation itself falls only 46.4cm away from the end of the 263km journey. The YEC error is like confusing something 2.5km long with something 25cm long. That's quite a big error. (It's worse than Father Ted explaining perspective to Dougal.)


We are not talking about some minor reinterpretations of data, here. We are talking about a total disregard for the accumulated scientific knowledge of decades to centuries. This is why it is so important that YEC is represented for what it is: a religious position, not a scientific one.

(Created using MapTime. See the MapTime Blog for instructions how to visualise Deep Time on a journey with more relevance to you.)
Posted by Richard Edwards at 03:01