On Saturday, I had a second birthday, like the Queen. My wife had bought us tickets for the BBC Comedy Prom (a future blog topic) in the Royal Albert Hall, London, so we had a bit of a day out in The Big Smoke. After a yummy brunch in Southampton (another future post), we jumped on the train and headed to South Kensington - some of the best museums in London are handily within a stone's throw of the Concert Hall. (Don't throw stones at it, though.)

The Natural History Museum must be one of my favourite places. Anywhere. Every time I go, I'm struck by how awesome the place is. Arriving early afternoon, we had to queue for a bit to get in (next time's going to pay to become a member and fast-track) but that just gave an opportunity to soak in a bit of the exterior.

It's such an impressive place in every way. Not only is it massive, and the displays excellent, but the building itself is a work of art. Everywhere you look, inside or out, there is amazing attention to detail, with animals carved into columns or pillars with nature-inspired geometric patterns. The ceiling of the main hall is covered with stunning botanical artwork.

Being a biologist, I normally visit the biological displays when I go to the NHM. (You can't beat fossils of crazy prehistoric beasties, like the giant sloth.) This time, for a change, we went to the Earth zone and had a look at the rocks.

"There's nothing to see here, they're just rocks," said one mother (sadly) to her daughter as she dragged her through the "red zone" towards the exit. I am hoping that these were purely words born out of frustration due to having reached "museum saturation" but I still feel sorry for the discouraged child, for these are not just rocks! 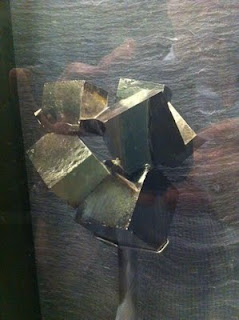 Take these crystals, for example. Stibnite on the left and pyrite ("Fool's Gold") on the right. Not the best photos but enough to give an impression of how crazy they are... and they're completely natural. If you ever wanted an example of how something amazing can just spontaneously arise from natural forces, look no further. "Just rocks", indeed!