Ok, so most people have forgotten MC hammer. Anyway, here’s a feel-good story (courtesy of WEIT) about PFC Hammer, a cat adopted by U.S. Troops in Iraq: 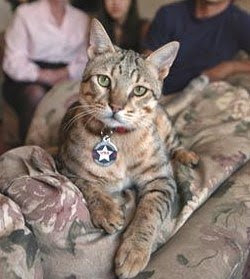 In 2004, a tiny Egyptian Mau kitten wandered into U.S. Army headquarters in Iraq. Dubbed PFC [Private First Class] Hammer, he became a ratter, morale booster, and important stress reliever to the soldiers. When the battalion was set to ship back to Colorado, Staff Sgt. Rick Bousfield contacted Alley Cat Allies and Military Mascots for help in getting PFC Hammer back to the States. PFC Hammer was vetted and quarantined before traveling to Colorado Springs, where he took up permanent residence with Staff Sgt. Bousfield…

And my favourite bit:

…When Hammer was being carried to Bousfield, he heard Rick’s voice and began purring and kneading the arm of the transporter. As it turns out, he remembered his Army buddy after all.

Read the rest of the story here.

Posted by Richard Edwards at 21:35