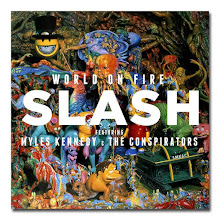 Weighing in with a bargainiferous 17 tracks, World On Fire is Slash (and friends) at his very best, especially the first few songs. With 17 of them, you would expect there to be some bum tracks on there - but there aren’t. An iTunes screen capture says it all, really:

If you only buy one album this year, I recommend this one.

Posted by Richard Edwards at 22:35