The rise, fall and rise of Irish whisky

Last Friday, we had another great Wine Club whisky tasting, run by whisky aficionado and kite-flyer extraordinaire, Lex. This time it was the turn of Irish whiskies and the line-up was a good one. 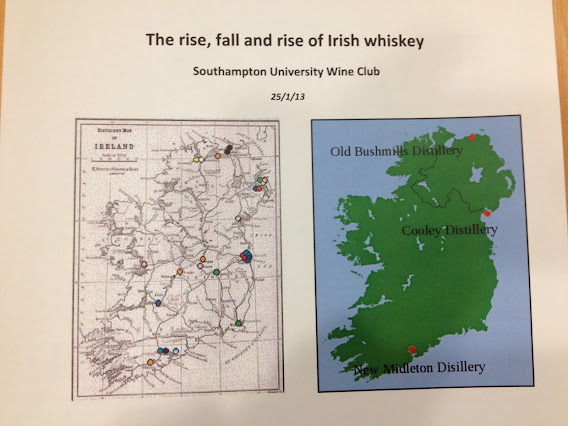 The title of the tasting - The rise, fall and rise of Irish whiskey - refers to the fact that Irish whisky is beginning to regain some of its former glory after a period of decline when Irish Distillers had the monopoly on Irish whisky production from 1972 until the opening of Cooley Distillery by John Teeling in 1987 (and its first whisky a few years later). With competition driving innovation once again, the quality (and reputation) of Irish whisky was back on the mend, and it was five of the mended varieties that we got to taste. 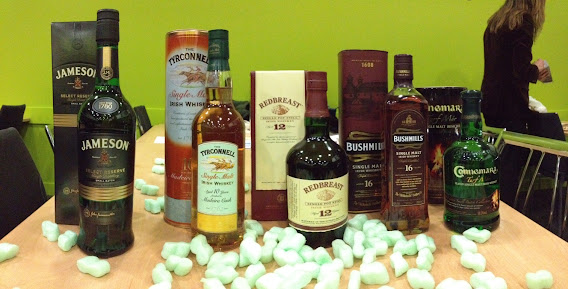 The evening kicked off with a Jameson Select Reserve (40%) from the Irish Distillers megadistillery in New Middleton, County Cork. This was to set a benchmark for the evening, which it did quite nicely: there's nothing wrong with this whisky but neither is there anything particularly notable about it.

The second whisky, on the other hand, from the Cooley Distillery was something a bit special: a 10 year old Tyroconnell Madeira Finish (46%). Although a close-run thing - and another night I might have chosen different - this was my favourite whisky of the night. It was pretty strong at 46% and was very warming to the palate as a result. It also had quite strong vanilla tones - hints of custard! I would happily drink this one.

For the third whisky, we returned to New Middleton for a 12 year old Redbreast (40%). This is an Irish "pot still" whisky made in the traditional fashion of mixing malted barley with other grains, which should make the flavour more complex. I liked it and found it very smooth to drink but more interesting than a Jameson or Powers etc. I did not get a great deal of complexity though - I think my whisky palate still needs some developing.

Fourth up was a Bushmills Three Woods 16 year old (40%). This one was unusual and had a very savoury character in contrast to the sweeter vanilla tones of the earlier whiskies. This was a popular one with many of the tasters but, sadly, it did not really do it for me.

The fifth and final whisky, on the other hand, punched the right buttons for me. Another Cooley offering, this was the Connemara Turf Mór, weighing in at a mighty 58.2% cask strength! As the name suggests ("big peat"), this was a peat monster and taking a sip was like getting a mouthful of smoke - in a good way! I found it surprising pale but what it lacked in colour it more than made up for in flavour. A very close second behind the Tyroconnell, which I just found a touch more drinkable. 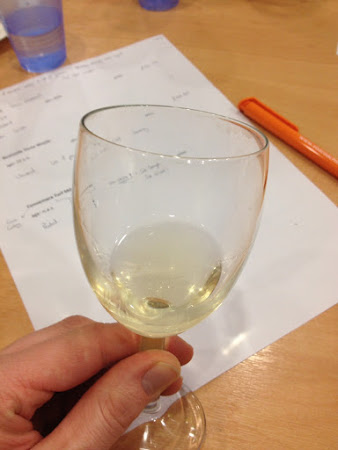 Nice one (or two), John Teeling!
Posted by Richard Edwards at 08:46