Revisiting the BlogPress App for iPad

The BlogPress App fell out of favour with me some time ago around the time that iOS 5 came out. (Yes, that long ago!) BlogPress had ceased accessing my online posts (draft or published) and then, once I updated to iOS5, it has stopped working altogether. I never deleted it, however, as I always retained the hope that it would get sorted out. As 2012 draws to a close and future blogging in 2013 is on my mind, I therefore thought I would try it out again and see. 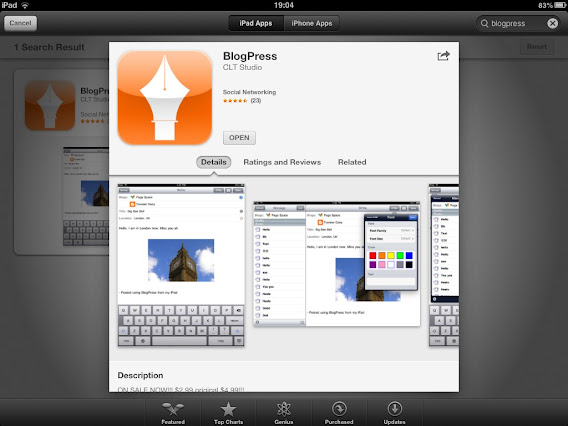 I'm not entirely sure whether I trust it enough to publish from it directly - although this post is a test in that respect. I am also worried about the pictures disappearing, as seems to have happened with some of my earlier blog posts. Despite this, however, it does have some nice features including common HTML options (including fonts) and could be useful for drafting posts for subsequent tidying and publishing on a proper computer. (It's more of an oPad after all!) 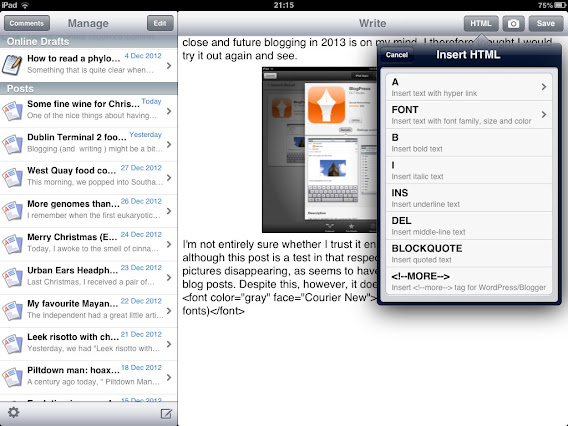 Indeed, having just looked at the preview for this post, I decided that a bit of extra editing was definitely needed. In particular, the pictures are not embedded that well. I have left the basic code alone but was not happy that the resolution of the image shown was almost half the actual size. (The pane width and image width is 568 pixels but the actual image resolution set by the "/sXXX/" part of the src path is only 288 pixels. Why?!) The Preview itself also looks decidedly odd - squished horizontally and missing the flanking parts of the page. Hopefully, following this quick edit in Safari, it will come out fine...

Posted by Richard Edwards at 21:05