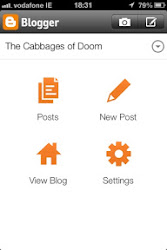 My recent revisiting of the iPad BlogPress App has made me curious about the Blogger App for the iPhone. Like BlogPress, I have not used this for a long time - I may have abandoned it when I first discovered BlogPress - but also not deleted it. I therefore thought I'd try a quick post with it to see how it works. 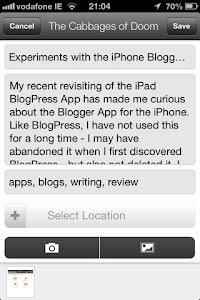 The interface is very clean and uncluttered and might be a good way of editing text for posts on the go. At the moment, I generally email the text (and pictures) when on the go and then tidy and publish later. I also have a bunch of (notes for) part-written posts in various text editors. If the Blogger App proves reliable, it might be a better solution for both. 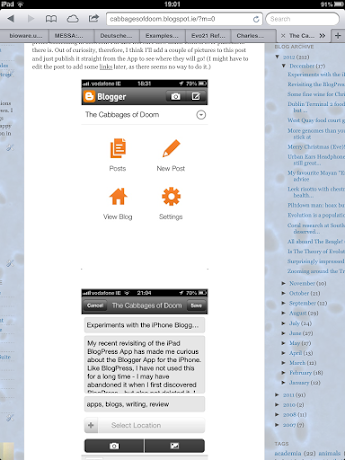 One weakness does seem to be how pictures are handled. As far as I can tell, you can either upload images full size or as a number of smaller sizes up to 640x480. I'd prefer something in between. I'm also not sure how much control over placement there is. Out of curiosity, therefore, added the two pictures above to this post and just published it straight from the App to see where they will go. The result is visible to the left and it's not that pretty, so I think a bit of online editing is definitely required. I'd also be a bit worried about the resolution of the pictures if they weren't just iPhone screen grabs, as in this example. (The abundance of white in the first image does not help, it is true.)

As well as the image issues, it's also easier to edit the post in order to add links and formatting to the text, although these can be added manually using raw HTML. The final risk is the tagging: Blogger will add tags but does not suggest existing ones like the Blogger website. Overall, though, I am keen to use it a bit more for the basic text content, until it let's me down. (I had one problem uploading a draft this morning but it was fine when I tried it later.)
Posted by Richard Edwards at 07:27