More on jet-powered flying squid - faster than a speeding Bolt 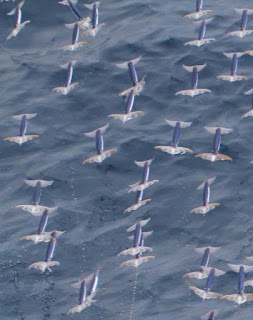 Happily, here is some of that research and another squid picture. (Picture taken from the Hokkaido University press release.) In fact, the photographs were central to the research. The article in this month's Marine Biology, charmingly titled Oceanic squid do fly, reports on the nature of the squids aerial exploits and gives details of the different phases of flight, as determined from a sequence of photographs by Masters student Kota Muramatsu.

It was actually summarised back in February (when the online version of the paper came out) in a few places, including a National Geographic article, "Scientists Unravel Mystery of Flying Squid". (I came across it today after a friend shared a Facebook photo from I f#@king love science.) These guys are fast!

AFP also covered the story ("Is it a bird? Is it a plane? No, it's a squid") with this great infographic of some of the main points:

Not as cute as the bioluminescent Hawaiian Bobtail Squid but very cool critters nonetheless.

Posted by Richard Edwards at 06:45