Tomorrow is my last double lecture of the academic year and it's on Reproductive Strategies and Sex Determination. Although the prep time is a bit greater, the benefit of teaching subjects that I'm not too familiar with is learning new and interesting things. These lectures had quite a few but one of the real highlights was the parthenogenetic whiptail lizards.

Parthenogenesis is a form of asexual reproduction that occurs in a bunch of animals. Most animals reproduce sexually, with a sperm fertilising an egg to form an embryo that then develops into a baby animal that is a genetic 50:50 mix of each parent. A parthenogenetic animal skips the whole fertilisation thing and produce eggs that develop into embryos without the need for sex or sperm. The mother then gives birth to a daughter whose genes are 100% maternal. I was already aware of some species of aphids (above) reproducing parthenogenetically, producing clonal nymphs. (Not all parthenogenetic animals produce full clones - some divide their diploid genome in two normally during meiosis but then double the resulting haploid genome to produce a "half clone" diploid daughter that contains half the maternal alleles.) Some aphid species "telescope" and the daughter has its own parthenogenetic daughter developing inside it when it is born! This is rather cool and interesting in of itself but is not actually the focus of this post.

Parthenogenetic organisms are ancestrally sexually reproducing and have evolved the capacity to reproduce without the need for fertilisation, which can be quite handy. We know this in part through phylogenetics (i.e. mapping modes of reproduction onto the family tree of the species in question) but even clearer evidence comes from the observation of sexual behaviours in parthenogenetic organisms. 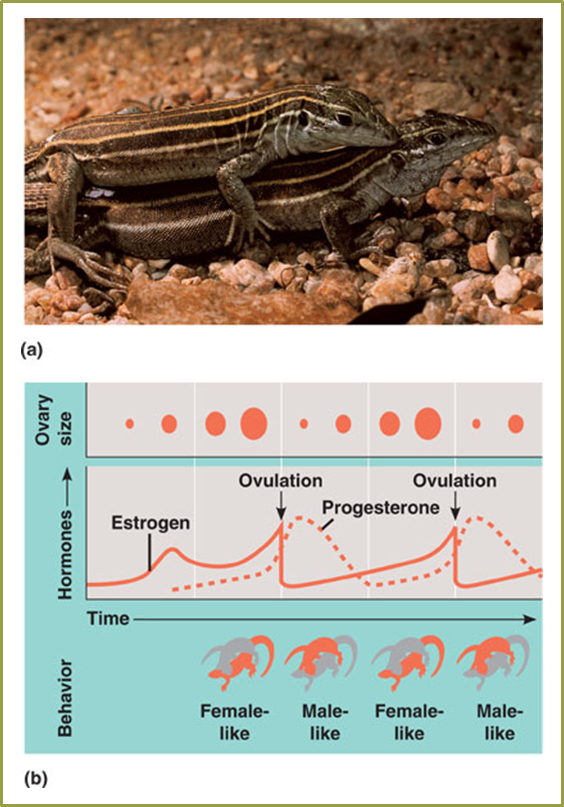 This brings us to the whiptail lizards. Some of these are parthenogenetic, which is pretty rare in vertebrates. The really interesting thing, though, is that they still exhibit girl-on-girl "mating" behaviour, which is needed to stimulate ovulation and the completion of the reproductive cycle. Being all female, they take it in turns to play the male and female role depending on what point in their hormonal cycle they are - "male" (on top) during peak progesterone levels and female (underneath) when estrogen is on the rise. Some animal species go one stage further and sperm is even needed as a trigger for embryo development, albeit without fertilisation, but this is "gynogenesis", not parthenogenesis. Crazy, huh?
Posted by Richard Edwards at 08:41