Why the Titanic is a big deal to Southampton

There are several places that stake a claim to the RMS Titanic, which struck an iceberg one hundred years ago today (twenty minutes before midnight, ship's time) and sunk just over two and a half hours later with over one thousand people still on board. She was built in Belfast, set sail from Southampton, and last stopped at Cobh in Cork (Ireland), then called Queenstown. All three have Titanic museums, including the new Sea City museum in Southampton, which opened recently.

I think that Southampton stands out, however, because the claim is not really about prestige or fame but genuine heart-felt loss. The reason for this is quite simple and horrifying: four fifths of the crew and about a third of the 1514 who died came from the city. This is approaching 0.5% of the population of the city at the time. This is perhaps shown best at the Daily Echo interactive map of the Titanic crew victims and survivors from Southampton: 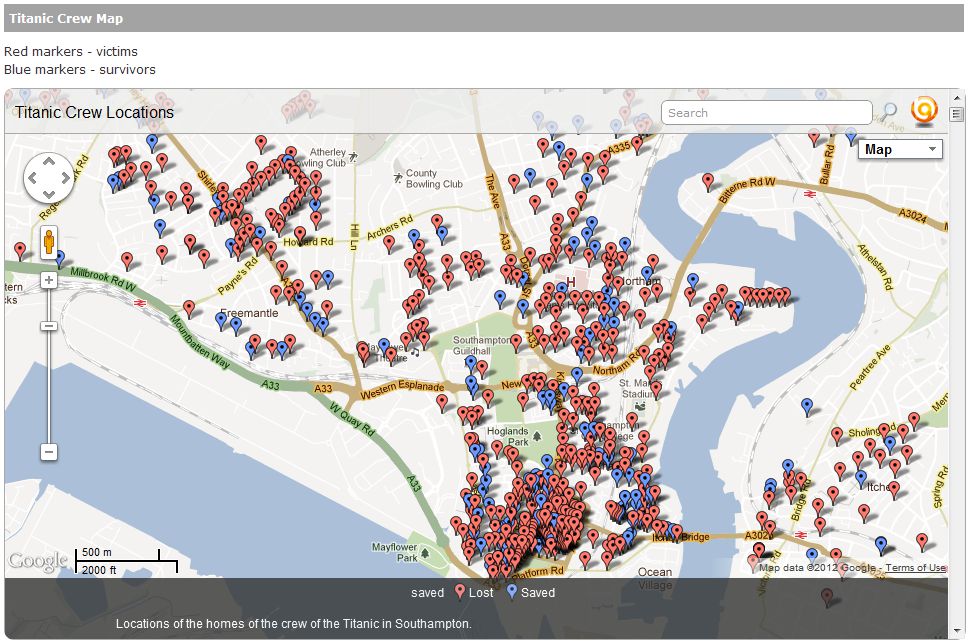 Another way to put things in perspective: in that one night, Southampton lost almost as many people as during the entire Blitz in World War II. (Southampton was bombed 57 times, destroying or damaging over 45,000 homes!) Some of the individual stories are worse even than this. At Northam School (near the current Saints stadium, St Mary's), for example, almost half of the 250 pupils lost their father in the disaster.

Living in Southampton, therefore, it seemed wrong not to write a short post about it. (Although, not coming from Southampton, I do not really think that I have a true sense of how the impact of the Titanic's loss is still felt.) So next time you are watching Kate and Leo in 3D, spare a thought for Southampton.
Posted by Richard Edwards at 03:27