No stars for NOM bigots thanks to Marriage #EquaLatte campaign

The issue of same-sex marriage has been getting a lot of attention recently, both sides of the Atlantic. Highlights have included a Scottish Cardinal who is so out of touch with reality that he believes legalising gay marriage would “shame the UK in the eyes of the world” (not the part whose opinion I would care about) and, in a mind-boggling statement of inverted intelligence, declared it to be a “grotesque subversion of a universally accepted human right”. (What?!) Of course, this was followed up by the greatest quote of all by Chief Executive of Stonewall, Ben Summerskill:

“If Roman Catholics don’t approve of same-sex marriage, they should make sure they don’t get married to someone of the same sex.”

It seems that things are a little more sinister across The Pond, and the (unfortunately not-ironically-named) "National Organization for Marriage" (for marriage, are you sure?) has called for a nationwide boycott of Starbucks for supporting Gay Marriage. Happily, we don't live in a world where conservatives get to enforce their narrow-minded bigotry on everyone else unchallenged, and Sum Of Us have started a counter-campaign to thank Starbucks for standing up for equal human rights, in their #EquaLatte campaign. (Who can resist a good pun, eh?) So far, over 640,000 people have signed up versus 29,000 on NOM's "Dump Starbucks" pledge site. Job done, I think. Well done, Sum of Us! (You can sign up here.) 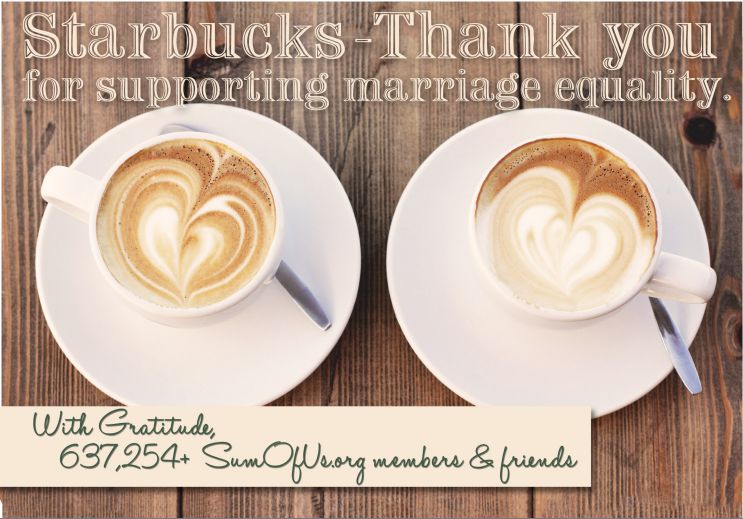 Posted by Richard Edwards at 04:19