The Grant Museum of Zoology 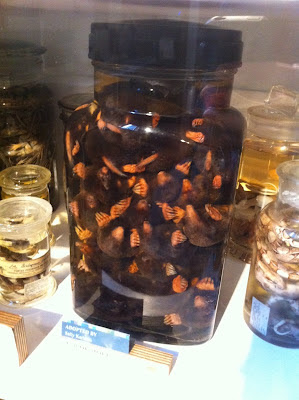 Today I was in London for a meeting at the Nuffield Foundation on Bedford Square. After the meeting, I had a bit of time to kill before the train home, so I paid a little visit to The Grant Museum of Zoology, which is part of University College London.

This place is great and well worth a visit if you are in the area and like Natural History. It's only open 1-5pm on weekdays but it's pretty small, so you don't need much time to look around. The essence of the museum is quite "old school" and it reminded me quite a lot of the Natural History Museum in Dublin a.k.a. "The Dead Zoo", with lots of skeletons and stuffed animals.

One of my favourite exhibits is the "jar of moles", which is quite literally a jar of moles! It was accompanied by jars of other animals, such as lizards. As the signs explained, these collections of the same animal were compiled for teaching purposes, not just because someone was addicted to collecting moles. The cabinet next to the jars of animals had a bunch of different brains in jars along with possibly my favourite sign in the museum. It was next to a brain coral and read quite simply: "Brain coral. This is not a brain." 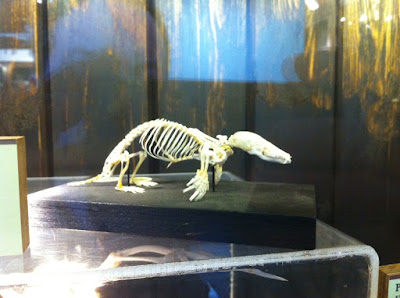 As well as educating about the animals themselves, with lots of skeletons (such as this mole, to keep the theme going), the Grant is educational about museums themselves; there are lessons on taxadermy and critter display mixed in with the collections and some history about some of the collectors. (They have some of Thomas Huxley's specimens.) It's also an interesting mix of old and new - sitting in front of glass cabinets full of preserved specimens were a bunch of iPads as part of their "QRator" project, with interactive questions and challenges.

All in all, a good way to kill half an hour or so in the Euston area.
Posted by Richard Edwards at 09:15