Today, we met my parents for lunch at the Drift Inn, a New Forest pub attached to the Beaulieu Hotel. We first visited this pub in January, when my brother was over from Ireland for a conference in the hotel and we met him for a pint and some dinner. The pub was cosy and the food was really tasty and we made a note to return. The atmosphere in the pub was really nice, with locals and their dogs as well as city folk like ourselves. As they say on their website:

I'd certainly agree with all of the above. The menu is a mixture of classics (burger, lasagne, fish & chips etc.) and some more interesting dishes (bubble and squeak burger). They also have daily specials, that always includes a pie and a steak of some sort. That first night, tempted as I always am by a good burger, I had game pie. It was delicious and bode very well for the other menu items. My starter - bubble and squeak topped with an egg and mushroom sauce - was also good.

A couple of weeks ago, we went back, this time for Saturday lunch. Tempted as I was again by the burger, I was in a bit of a fish mood and went for the beer-battered fish and chips. It was every bit as good as my memory of the pie and the chips were fantastic - crispy on the outside and fluffy in the middle; they must be at least twice-cooked. The mushy peas were a little disappointing, being mushed actual peas, rather than the usual processed kind. They were still nice, just not what I expected (or fancied).

Two successes out of two meant that it was natural choice for an (early) Mother's Day/Birthday/St Patrick's Day lunch with the folks. Today, I succumbed and went for the burger. (Although the Beef & Guinness pie was a close second choice.) Although not quite up to the standard of the Dandy Lion in Bradford-on-Avon, the burger was really good; juicy and meaty and full of flavour. Mmmmm. The chips were fantastic again and definitely get my seal of approval. The allure of the starters was too strong and my wife and I (unnecessarily) shared some smoked mackerel with celeriac remoulade. Good as it was, next time I think I'll save room for a chocolate brownie! (Although the potato skins my parents shared for a starter also looked tempting.)

Stuffed to the gills, we skipped dessert and went for a bit of a stroll after lunch before heading back home for the England-Ireland rugby match. A future pub walk beckons, I think. 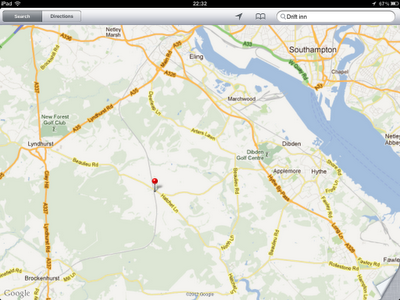 Posted by Richard Edwards at 10:38