I am a bioinformatician working in Sydney, Australia. I recently helped to organise the ABACBS2015 conference in Sydney, where ABACBS stands for the Australian Bioinformatics And Computational Biology Society, of which I am a member. I am also part of the New South Wales Systems Biology Initiative. You may therefore find it surprising to know that I found it surprising to find out that in December, Sydney NSW will be host to "ICBCSB 2015 : 17th International Conference on Bioinformatics, Computational and Systems Biology". 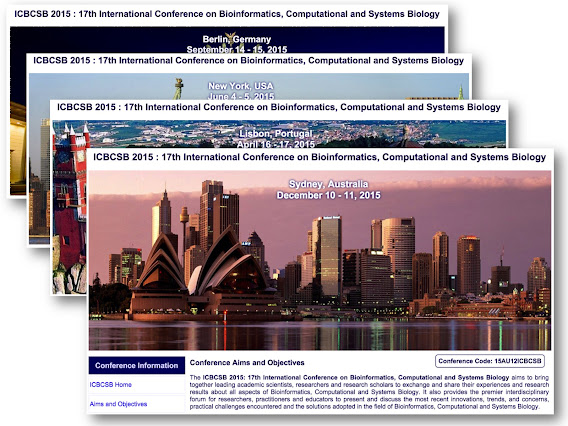 This makes OMIC Group Conferences look positively legit. Indeed, the organisers of all 15+ ICBCSB 2015 conferences - the World Academy of Science, Engineering and Technology (WASET) - seem to be basing their conference business model on that of OMICS. Or perhaps it was the other way round. Either way, if you replaced the WASET logo on the website with OMICS Group, nothing would seem out of place.

If you have ever attended a (real) scientific conference, pick one of those past conferences at random, for example Berlin, and click on the conference photos page, then tell me if you have ever seen anything so depressing in your life. And remember: these are the photos they chose to put up, so presumably show the conference in its best light. Given the number of group photos of (all?) the delegates, I wonder whether they had time for much else other than publicity shots. And in case you are thinking: “those are probably just the invited speakers”, I would bet good money that the delegates were all invited - and still had to pay top dollar to attend.

Finally, in case you have any doubt, just Google “WASET scam”. It does not make for happy reading.

If you are in bioinformatics or systems biology, please spread the word far and wide about these conferences and why they should be avoided at all costs. The sooner we starve the likes of OMICS Group and WASET of naïve unsuspecting scientists to prey on, the sooner these parasites will f#@k right off. There are plenty enough legit conferences to choose from. (Yes, it makes me angry.)

And if you have already signed up for Sydney ICBCSB 2015, do not despair. As luck would have it, there is a real bioinformatics event being held in Sydney that same week: BioInfoSummer 2015. It’s more of a workshop than a conference but there will be plenty of opportunities to discuss science with some excellent bioinformaticians and systems biologists. At least that way, you won’t waste the plane ticket and hotel costs, even if WASET won’t give you a refund for pulling out. (Not likely!)

Posted by Richard Edwards at 17:49