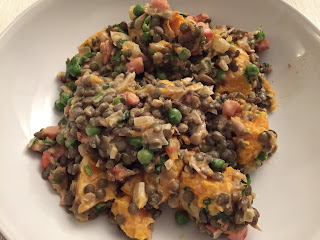 This is another repeat favourite, based on a Waitrose recipe, Rosemary-roasted squash with ham hock and lentils. Aussies are more into cow than pig products, so it’s not so easy to get decent ham/bacon etc. However, this recipe does just fine with some fried bacon chunks rather than the (cooked) ham hock in the original. The original also used frozen squash.

You can pre-roast the squash for this recipe.

Tastier than it looks (with my food photography skills, at least) and makes good leftovers too.

Posted by Richard Edwards at 22:35