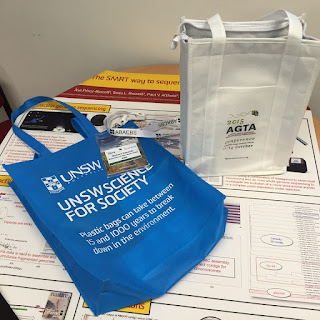 Two weeks ago, I attended the awesome double-header of ABACBS2015 and AGTA15. In some ways they were chalk and cheese - ABACBS was cheap and cheerful, where as AGTA was expensive and (therefore) exclusive - but both were great and highlighted some of the very best features of successful academic conferences.

As part of the ABACBS2015 organising committee, I needed to collect my thoughts for a debrief, so I thought I’d got down some thoughts here. (Thanks to grant writing, the post itself got a little delayed!) As with biology itself, most decisions are trade offs and the following comparison is not to criticise - I just find it interesting. As with the awesome ABiC14 conference last year, I mainly want to document good practice for future reference. (Some of these will no doubt be repeats of my ABiC14 thoughts!)

Size. Both conferences were, for me, the perfect size - around 180-190 people. This is enough to give the conference a good buzz and ensure that there are sufficient interesting people to listen to and posters to visit. Critically, though, it was small enough that you could find and speak to the people you wanted to. (Even if I didn’t fully get the chance at ABACBS2015 because I was busy, and managed to miss some people at AGTA15 because time ran out!)

Venue. ABACBS2015 was run on a budget and we were very fortunate to have the Garvan Institute provide a free venue for the conference. The Garvan lecture theatre is lovely, with a great AV system and comfy seats. The only negative for a conference of that size - and we got close to our 200 person limit - is that the space outside the theatre for breaks and posters does get a bit cramped. In contrast, AGTA15 was held in the Crowne Plaza at Hunter Valley, which is a pretty luxury hotel in the wine region of New South Wales. It took me a while to warm to the main conference setup, with seats around tables in a large, wide room with a screen each side of (and a long way from) the podium. However, the “trade exhibition” space where the breaks, lunch and posters were, was excellent. I am big fan of having the posters up all the time and in the same place as the breaks.

Location. ABACBS was held in the city centre at a research institute. This kept the costs down and made it easy to get to. (We did not organise accommodation.) It also made it easy to escape from, which might have affected evening social numbers. AGTA was out in the sticks, which made it harder to get to and may have put some people off attending - it essentially added another day to the length of the conference. The plus side of this was that everything was on one site and it was not so easy to disappear or go home, and so most people were around most of the time, I think. (Although there was the temptation of wine tasting on the doorstep!)

Goodie bags. I’m pleased to say that both conferences went down the reusable shopping bag route (pick above). Being budget, we got UNSW to sponsor us with some canvas bags for ABACBS. (Complete with the scary statistic that plastic bags take 15-1000 years to break down.) AGTA was (a) a bit more upmarket and (b) in wine country, so they provided wine coolbags!

Trade exhibition. We binfies are a cheap lot - and I don’t mean tacky or miserly, I mean that we don’t need a lot of money to do great things. As a result, it is hard to attract trade sponsors: we just don’t spend (or often even have!) any money! Genomics is clearly a different matter, as you literally cannot do it without lots of expensive kit. The AGTA trade exhibit was therefore pretty big and bustling. Again, putting it with the food and posters made for some great…

…Breaks. Breaks really do make or break a conference. One of the few criticisms of ABACBS2015 was that the breaks were a bit too short - we were somewhat hemmed in for time because we needed to leave people enough time to get to AGTA in the afternoon of the second day. We also tended to over-run a little, because people would be enjoying the breaks and take a bit of time to filter back into the theatre for the talks. My advice for conference planners: (1) make all breaks 5-10 minutes longer than you think they should be (e.g. 40 minutes for coffee and over an hour for lunch); (2) build in some dummy time into the program to soak up delays; (3) Make sure you have a bell or something to signal that the next session is starting! Being a more leisurely multi-day conference, AGTA had nice long breaks, including a session off for posters etc. after lunch. Lots of opportunities for mingling and looking at posters.

Invited speakers. Both conferences had outstanding invited speakers that gave really interesting talks. I know some of the binfie crowd would have enjoyed a bit more about the methodology in ABACBS2015 - and we should perhaps brief our speakers a little better in future - but personally I was blown away by the quality of the science presented. Both fields are rapidly changing as technology opens up opportunities and there is some really cool stuff going on out there! AGTA in particular seemed to have a lot of invited speakers, talking about really cool stuff - possibly part of the reason it's so expensive. (It must be said: the quality of the selected abstracts was good too!)

Gender Equality. Both conferences did pretty well on the gender front, I think. ABACBS2015 in particular nailed it, with a 50% split of invited speakers and over 50% female speakers overall! (The latter wasn’t deliberate as such - there are just loads of good female bioinformaticians in Australia who submitted interesting abstracts!)

Twitter. (And #confBingo.) I have mixed feeling about live tweeting at conferences. This year, I decided to throw myself in a bit more and, on balance, I feel that I got more out of it than I missed. It is true that sometimes I missed something a speaker was saying because of a tangential Twitter conversation (such as #JediKelpie) - but I also learnt stuff and picked up on things that I had missed thanks to the Twitter feed. The #confBingo thread was also quite entertaining a fun, and helped networking and building community spirit, which is what a lot of a good conference is ultimately about.

Coffee. Unfortunately, we were unable to attract the barista sponsor from ABiC14 to sponsor ABACBS2015. AGTA did have a sponsored barista, though. Roche (I think) gave out three tickets with registration for the trade exhibit barista. Not quite as good as unlimited but it hit the spot. My other top conference coffee tip: bring a reusable cup! It' so much easier/safer if you want to take coffee into the talks and generally cuts down on spills - and refills! (Next year, I am hoping for ABACBS Keep Cups in the goodie bags!)

Overall, I had a lot of fun helping with the conference organisation - and would recommend it - and even more fun attending. Australia has some great science going on and a really strong/vibrant bioinformatics community, and I am proud to be part of it.

Posted by Richard Edwards at 19:14