Beyond herbicides for weed control

Reported in last week’s Science News article, The War Against Weeds Down Under, Australian farmers have been getting creative with non-chemical warfare against the weeds that blight their island continent.

Increasingly, weeds are becoming resistant to herbicides and switching to a new herbicide often just results in new resistance after a few years. On top of this, there is generally a progression into nastier chemicals - and more of them - as favoured herbicides lose effectiveness, which is clearly not good for sustainability or the environment.

Australia has particular problems of pest plants with multiple herbicide resistance - one of the worst is a species introduced for sheep feed, Ryegrass - and have been pioneering new versions of more old-school solutions: physical warfare. One of the simplest is just burning the weeds after harvest to destroy their seeds. This is pretty effective - for Ryegrass, at least - but has some disadvantages including loss of nutrients from burning.

An alternative with particular promise is going sheerly physical and grinding weed seeds out of existence. As published in Soil Science last year, Australian farmers and scientists have converted mining equipment called a “cage mill” or “impact crusher” into the “Harrington Seed Destructor”, which is able to destroy a reported 95% of Ryegrass weed seeds. As well as being more effective than burning, all the nutrients from the destroyed chaff is put back into the soil, presumably reducing the need for fertiliser into the bargain. 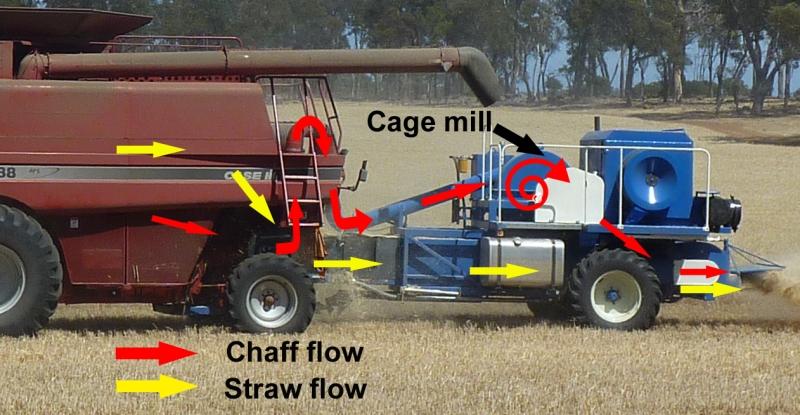 “Nothing will survive in there…”

Another advantage of physical destruction over chemical attack is that it seems more difficult for the weeds to fight back. Thanks to the awesome power of Natural Selection, it is probably only a matter of time before resistance evolves to any given herbicide. Whether they could evolve to have seeds small/tough enough to survive the Harrington Seed Destructor is less clear, especially without compromising their competitive advantage. Either way, it’s useful to have another weapon in the arsenal, even if it is a bit pricey at the moment at $A250k. It’s also good to see that future weed management could potentially be effective and environmentally friendly. Hopefully, other countries will follow suit.

Posted by Richard Edwards at 08:54