What do a Lurcher called Zak and a cheetah have in common?

Actually, these animals have lots in common - they are both mammals, carnivores etc. - but I'm thinking of something a bit more esoteric: both have had their locomotive performance measured by a special collar designed by Alan Wilson and the Structure & Motion Laboratory at the Royal Vetinary College in London. (The same technology was also used for the collars that tracked 50 cats from Surrey in the recent BBC Horizon, “The Secret Life of the Cat” programme, which is well worth a watch!)

The team have used the collars to study cheetah hunting behaviour, which was recently published in Nature and featured in the June 13th Nature podcast. The study itself is interesting and demonstrates how raw speed - the big thing the cheetah is famed for - is actually secondary to agility and power (i.e. acceleration and deceleration) when it comes to hunting success. Even so, the wild cheetahs still chalk up bursts of up to 59 mph (93kph) whilst hunting, which is not too far off the 65mph (105kph) top speed recorded in zoos.

The bit that really appealed to me, however, was how the collars were tested prior to being deployed in the field, which I find pleasingly elegant and effective. Prof Wilson’s pet lurcher, Zak, was given a run about on the beach whilst wearing a collar. (Two actually, as the new collar was being compared to older technology as well.) The data from the collar was then used to reconstruct Zak’s movements, which could be compared to the footprints left in the sand! 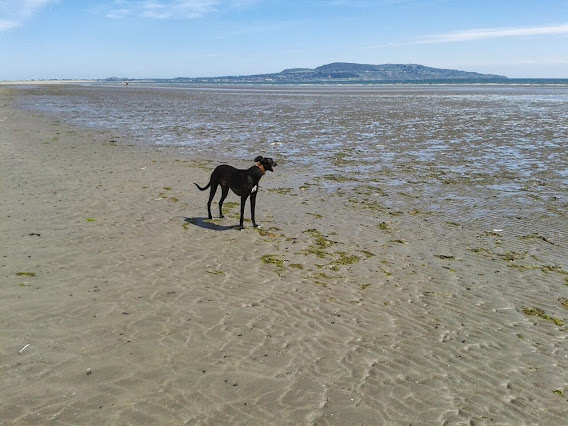 (The handsome chap in the photo above is not actually Zak but Dexter, my sister-in-law’s lurcher, on Dollymount Strand with a nice view of Howth in the background.)

Find more details of the study in Nature news, the podcast and, of course, the paper itself:

There’s also some coverage on Why Evolution is True that appeared whilst this post was sitting in drafts.

Posted by Richard Edwards at 20:08