Putting Archaeopteryx back on its perch? 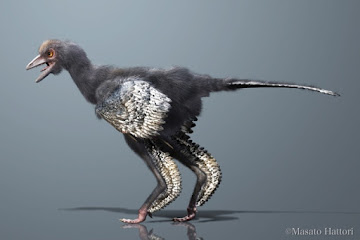 Around this time last year, the sad news came out that South Korean textbook publishers were removing examples of evolution following pressure from Creationists. [Soo Bin Park (2012) South Korea surrenders to creationist demands. Nature 486:14.] One of the examples to be dropped was Archaeopteryx, on the grounds that it might not be an ancestral bird after all. I am not sure how they will respond to last week's news that recent research puts Archaeopteryx back in the bird lineage, as opposed to being "just another feathered dinosaur". (Just‽)

The study in question, A Jurassic avialan dinosaur from China resolves the early phylogenetic history of birds [Godefroit et al., Nature (2013) doi:10.1038/nature12168], describes a 170-million-year-old fossil (below). Twenty million years or so older than Archaeopteryx, Aurornis xui is touted as the earliest definite early bird. (Artist's reconstruction, above.) Furthermore, the traits it shared by the two seem to put Archaeopteryx fully back within the ancestral avian lineage. 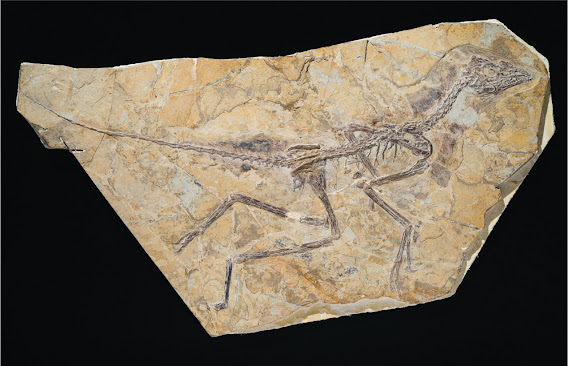 The authors include one of my Southampton colleagues, Gareth Dyke, and you can hear him discuss the paper on the Nature Podcast at the Nature News article, New contender for first bird. You can also read a summary in the Science news of the week - Science 340:1024-1025, Earliest Birdie? [Pictures from the linked Nature and Science news items.]

Of course, whether or not Archaeopteryx is an ancestral bird or not, that does not alter the irrefutable fact that birds did evolve from dinosaurs. The real solution to the challenge by Creationists should not have been to take Archaeopteryx out of the textbook but to put more fossils into the textbook. Teach the actual "controversy", such as it is: from which dinosaurs did birds evolve?
Posted by Richard Edwards at 06:31