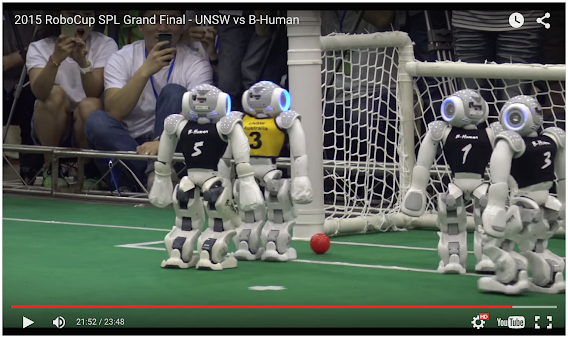 Following the first the first innings performance of their cricket team at Trent Bridge, the Aussies need a sporting success story. Happily, the UNSW Australia Robocup team has been able to provide such a story.

Yesterday’s piece in The Conversation by team captain Sean Harris, How we won the world robot soccer championship, gives an interesting insight into the competition and how our team was able to overcome the Germans in the final.

It makes for strangely compelling viewing. It’s pretty awesome to consider that these are autonomous robots - this is no Robot Wars scenario where the humans are controlling from the sideline. Of course, it is rather unrealistic as soccer: when players fall over (sometimes themselves but usually following contact), they get straight back up again!

After watching the first couple of minutes for authenticity, I recommend dialling the speed up to 2x for a bit more action. Watch for the great Maradona moment by UNSW #3 (screenshot top) at about 21:30 (dribbling round everyone, not scoring with his hand!) followed shortly afterwards by a fantastic long range strike by my personal “robot of the match”, UNSW #5!

Posted by Richard Edwards at 14:26