Congratulations to the South Sydney Rabbitohs, who have just won the Australian National Rugby League Grand Final 2014. The Rabbitohs are our local team, so we watched the game (on TV) - and it was a cracker! 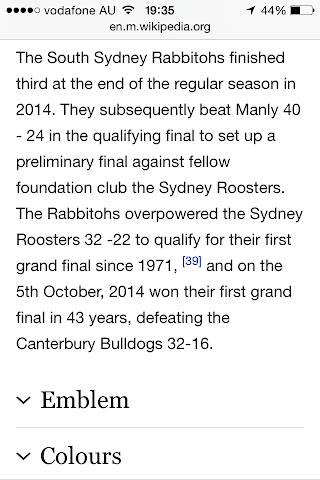 Although I must confess that it was the first NRL game that I’ve watched properly (being more familiar with Union back in the UK & Ireland), I must also admit that I don’t think it will be my last. It's pretty brutal but very exciting.

I decided to do a bit of reading up on the Rabbitoh’s before the match and was surprised to see that Wikipedia already listed a Rabbitohs win! It was taken down at some point but I got a screen grab first (right). The final score was 30-6, so the jokester in question was only a couple of digits out!

The game started with a crunching tackle which broke the cheekbone of Bunnies’ hero and man-of-the-match (Clive Churchill Medal winner) Sam Burgess. Burgess went on to play the entire game with a broken cheekbone, reminiscent of their 1970 victory when the skipper played 70 minutes with a broken jaw! Tough game, tough players!

Posted by Richard Edwards at 22:17