Last weekend, I attended the inaugural Australian Bioinformatics Conference (ABiC 2014) in Melbourne. (Twitter tag #ABiC14 so as not to be confused with the ABIC Foundation conference in California.) I’ve been to quite a few conferences in my time, including a fair few bioinformatics conferences. The latter (in my experience) are often quite dull affairs - good for meeting people and “networking” but not so good for interesting science beyond the invited keynote speakers.

Happily, ABiC14 went far beyond expectations. I signed up because it is important for me as a relative newbie to meet more Australian bioinformaticians. This was accomplished but was only the start of the positive experience of this conference. In fact, the conference was so good that I thought it worth posting its successful attributes/decisions as a model for future conferences (and reminder to myself should I organise one).

Here then, in approximate chronological order, are my top take-home quality attributes of ABiC 2014:

Organisation. The conference website was well organised and clear prior to the meeting. The program outline was available in good time, enabling planning, with abstracts etc. available in a single PDF. The only real improvement I can think of would be to have a printed program (just the outline, not full abstracts) provided upon arrival. However, because there were no last minute changes to the program, this turned out to be a moot point.

Coffee. Science in general, and bioinformatics specifically, is fuelled by coffee. The Aussies do coffee well and ABiC 2014 had the genius idea of a sponsored barista who made a decent cup of fresh coffee to order. I took advantage of this on arrival, which really set me up for the morning session and got the whole thing off to a great start.

Venue. The Royal Children’s Hospital was a great venue. Access by public transport was easy. The lecture theatre was comfortable and a good size. Eduroam provided free WiFi access (even if HTTP sites were unavailable for some reason). Coffee breaks, lunch, and poster sessions were near to the lecture theatre and promoted mingling.

Size. I’m not sure what the final number of delegates at ABiC 2014 was but for me it was the perfect number. (I would guess around 180+/-.) There were enough people for some interesting diversity, presentations and posters but not too many to actually get to chat to people and visit all the interesting posters.

Interesting Science! This is clearly one of the most important aspects of a good conference but sadly one that is often not achieved by a bioinformatics meeting (beyond the keynotes). I think there were several contributing factors to this. First, there were not too many talks and no parallel sessions. There were twenty talks in total, in six sessions of 3-4 talks of 10-50 mins each. Each session kicked off with an invited speaker. By keeping the quantity down, the quality of the talks - and stamina of the audience - was maintained at a very high level. I was expecting to “zone out” and struggle to maintain concentration a few times but I found my attention captured by each speaker. Talk quality was further enhanced by…

No published conference proceedings. Because of the large computer science community within bioinformatics, a lot of bioinformatics conferences have the submitted work published as papers in conference proceedings or a journal special issue. Even when the journal is a good one, this massively decreases the likelihood of getting interesting science, which will normally be either (a) published in a higher impact biology or general science journal, or (b) not yet be ready for publication. As a result, talks tend to be more technical and specialist… and boring. ABiC 2104 avoided this trap.

Food. You don’t go to a conference for the food but having tasty snacks at the breaks and at lunch does add to a general vibe of happiness and satisfaction.

Beer. Scientists and computer geeks are not always the most extrovert of individuals, and a little something to grease the wheels of social interaction never goes amiss. The ABiC committee went as far as to establish the beverage categories of choice with a pre-conference questionnaire. They gained extra brownie points from me for the presence of Fat Yak among the offerings.

Posters. This is largely a composite of the above points but the poster session was one of the better ones I have attended. For a start, the posters were up for the entire conference. It really bugs me when conferences do not do this and it all comes down to choice of venue - so well done ABiC for selecting a venue with this capacity. Furthermore, the poster location had great access - being a wide corridor - and was between the auditorium and the morning/afternoon drinks and snacks, maximising quality exposure. Furthermore, restricting the number of talks saved lots of interesting science for the posters!

Conference Dinner. If you are lucky, the conference dinner will be one of the best networking points of a conference, as your table represents a fairly captive audience with whom you have to interact. Nevertheless, conferences are generally charged to grants and researchers are on a budget, so it is frustrating to be forced to spend a load of cash on a meal that rarely lives up to the expectation of the price tag. ABiC 2014 took a pragmatic solution of booking out a restaurant and bar, and everyone paying for their own meal and drinks ordered off a standard single course menu. It worked really well. The food was good (but not excessive) as was the company. There was only one course but you never need more than that when there are morning and afternoon snacks in the breaks.

Timing. As far as I could tell, the talks generally seemed to stick to time, so coffee/lunch breaks were not truncated. Again, by keeping the number of talks (and talks per sessions) low, this was easier to achieve. Nonetheless, it's still something that is not achieved by all conferences. (I remember one conference in which my talk started 5 minutes after it was supposed to finish!) 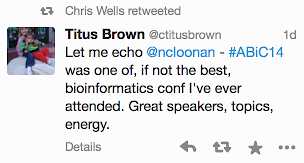 Twitter. I’m a bit sporadic on Twitter at the best of times and not entirely convinced that live tweeting in a conference is not generally more of a distraction than a benefit - for those present, at least. However, I did enjoy having the #ABiC14 twitter feed open during the meeting and felt that it added to the sense of community. Of course, the aforementioned interest of the talks (and the smallish size of the meeting) limited the distraction.

As of the end of ABiC 2014, there was no plan for an ABiC 2015. I, for one, really hope that there is one - and that the organisers are able to stick to the same model.

Posted by Richard Edwards at 16:00