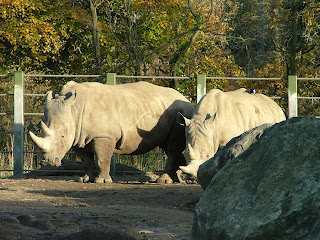 Extinction - and danger of extinction - is sad whatever the cause but when the cause is motivated by sheer nonsense it is particularly upsetting. Black Rhino are critically endangered and under increasing threat from poaching because of their horns. (The picture is actually of Southern white rhino at Dublin Zoo, which are "near threatened" rather than endangered.)

The stupid thing is that the horns have no intrinsic value - they are just keratin, which is essentially the same material as hair and nails. It is only because traditional medicine in several countries value rhino horn so highly, that poaching is so lucrative. Rhino horn has no clinically proven benefits. You might as well grind up your toe-nail clippings. (Try spinning that as an aphrodisiac.)

I've moaned before about Homeopathy and the like but the importance of evidence-based medicine goes well beyond the obvious issue of efficacious treatment. Promoting any woo indirectly supports all the tragedies associated with extreme cases, including using endangered species in "traditional" medicine. If it really works, the chances are that we can work what it is that is actually having an effect - and possibly why - and try to find an alternative source. All the time we embrace ignorance, we embrace ignorant practices.
Posted by Richard Edwards at 04:36