Some Darwin quotes for Darwin Day 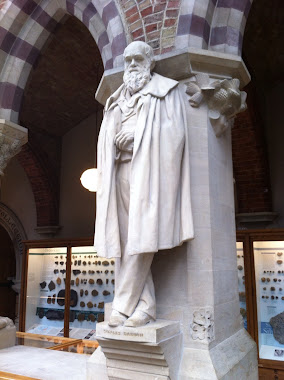 Today is Darwin Day, so why not visit DarwinDay.org and see if there are any activities in your area? Alternatively, you can follow Darwin's adventures on HMS Beagle in blog or tweet form. I've been reading the blog of his diary but I think he was too seasick to mention his birthday in the entry for 12th Feb 1832:

There has been a little swell on the sea to day, and I have been very uncomfortable: this has tried and quite overcome the small stock of patience that the early parts of the voyage left me. Here I have spent three days in painful indolence, whilst animals are staring me in the face, without labels and scientific epitaphs.

Of course, another great Darwin Day activity is to read/browse On the Origin of Species by Means of Natural Selection, or the Preservation of Favoured Races in the Struggle for Life? As well as the PDF linked there, you can also get it free on the Kindle. I've not read it for some time but whenever I dip into it I am struck by how much he seemed to understand the process of Natural Selection despite no one having a clue at that stage about the biology underlying heredity.

"From these considerations, I shall devote the first chapter of this Abstract to Variation under Domestication. We shall thus see that a large amount of hereditary modification is at least possible, and, what is equally or more important, we shall see how great is the power of man in accumulating by his Selection successive slight variations. I will then pass on to the variability of species in a state of nature ... As many more individuals of each species are born than can possibly survive; and as, consequently, there is a frequently recurring struggle for existence, it follows that any being, if it vary however slightly in any manner profitable to itself, under the complex and sometimes varying conditions of life, will have a better chance of surviving, and thus be naturally selected. From the strong principle of inheritance, any selected variety will tend to propagate its new and modified form." [Introduction]

This is still a good summary of the general principle and process of Natural Selection even in 2013. Darwin recognised that Artificial Selection and Natural Selection are essentially the same thing. We have filled in a lot of the details but Darwin really did get the basics largely right, which is one of the reasons he is still honored by evolutionary biologists. It is re-stated more clearly in Chapter XIV, Recapitulation and Conclusion, in a way that I like because it really lays out the challenge that stands before Creationists to this day - how could Natural Selection not happen?:

"If then we have under nature variability and a powerful agent always ready to act and select, why should we doubt that variations in any way useful to beings, under their excessively complex relations of life, would be preserved, accumulated, and inherited? Why, if man can by patience select variations most useful to himself, should nature fail in selecting variations useful, under changing conditions of life, to her living products? What limit can be put to this power, acting during long ages and rigidly scrutinising the whole constitution, structure, and habits of each creature,--favouring the good and rejecting the bad? I can see no limit to this power, in slowly and beautifully adapting each form to the most complex relations of life. The theory of natural selection, even if we looked no further than this, seems to me to be in itself probable."

"Can the principle of selection, which we have seen is so potent in the hands of man, apply in nature? I think we shall see that it can act most effectually. Let it be borne in mind in what an endless number of strange peculiarities our domestic productions, and, in a lesser degree, those under nature, vary; and how strong the hereditary tendency is. ... Let it be borne in mind how infinitely complex and close-fitting are the mutual relations of all organic beings to each other and to their physical conditions of life. Can it, then, be thought improbable, seeing that variations useful to man have undoubtedly occurred, that other variations useful in some way to each being in the great and complex battle of life, should sometimes occur in the course of thousands of generations? If such do occur, can we doubt (remembering that many more individuals are born than can possibly survive) that individuals having any advantage, however slight, over others, would have the best chance of surviving and of procreating their kind? On the other hand, we may feel sure that any variation in the least degree injurious would be rigidly destroyed. This preservation of favourable variations and the rejection of injurious variations, I call Natural Selection. Variations neither useful nor injurious would not be affected by natural selection, and would be left a fluctuating element, as perhaps we see in the species called polymorphic."

The other great thing about this paragraph is the last line. Another unfair criticism leveled at "Darwinists" is the idea that we think that Natural Selection explains everything. It never has and never will. Right from the outset, Darwin alluded to what we now know as Random Genetic Drift - the "fluctuating" evolution of neutral variants in traits that are "neither useful nor injurious".

Another thing that stands out is how little Creationist arguments against Natural Selection have progressed in the last 150 years. Like the good scientist that he was, Darwin outlined a number of potential difficulties to his theory. In the final chapter, however, he summarises the objections thus (my emphasis):

"Such is the sum of the several chief objections and difficulties which may justly be urged against my theory; and I have now briefly recapitulated the answers and explanations which can be given to them. I have felt these difficulties far too heavily during many years to doubt their weight. But it deserves especial notice that the more important objections relate to questions on which we are confessedly ignorant; nor do we know how ignorant we are. We do not know all the possible transitional gradations between the simplest and the most perfect organs; it cannot be pretended that we know all the varied means of Distribution during the long lapse of years, or that we know how imperfect the Geological Record is. Grave as these several difficulties are, in my judgment they do not overthrow the theory of descent with modification."

Creationists and Intelligent Design Creationists still go after these zones of ignorance. The big difference is that we often now have a very good idea of "how ignorant we are" and can say with great confidence that the remaining objections "do not overthrow the theory of descent with modification" and are, indeed, wholly consistent with it.
Posted by Richard Edwards at 05:18