A bit more than Three Good Things on a Plate - Mushrooms, scone and soured cream recipe

I'm a bit of a fan of Hugh Fearnley-Whittingstall's cookbooks and we have a few of the River Cottage series. I've blogged before
about Veg Every Day. I also got The River Cottage Meat Book for Christmas and one of my New Year's Aspirations was to cook more/better meat. I've not yet been able to do that but the veg
front has been more successful and this weekend saw another Hugh Fearnley-Whittingstall veg recipe triumph.

This one was not from Veg Every Day, though. Another Christmas present this year was Hugh's Three Good Things, which features recipes predominantly consisting of "three good things on a
plate". I think there is a bit of artistic license here, to be honest, as the recipe I made yesterday - Mushrooms, scone and soured cream - had considerably more then three things in it, although I guess that the "mushrooms" is really short for "mushroom stew". The stew was then topped with a cheese scone mix and baked in the oven, like a cobbler. 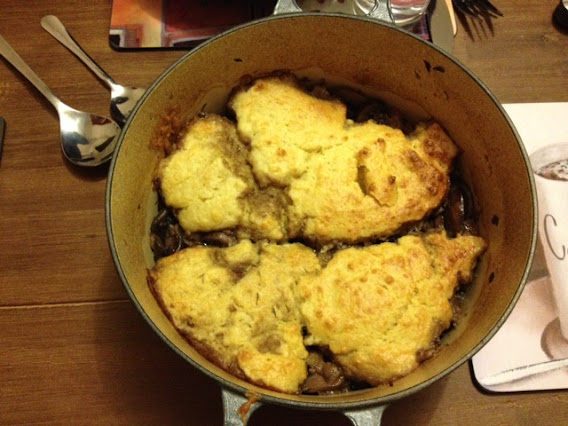 I'd never made a cobbler-style dish before and I haven't made scones for years - I'm not the baker in our house - so I was a bit nervous but it turned out pretty well, despite a couple of mistakes on my part. A "rustic" finish but exceptionally tasty and well recommended. The third "good thing" - soured cream - was just for serving. 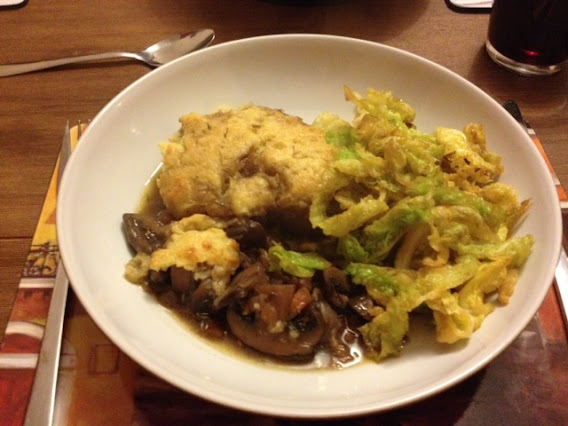 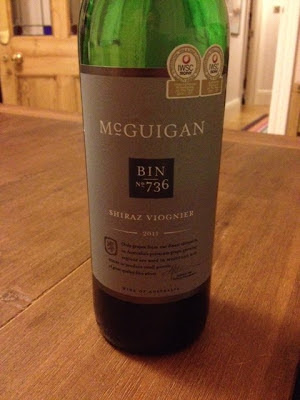 I'm a big fan of mushrooms and they really are the star of this dish (although the scone topping was pretty fine too). The key, as ever with mushrooms, is to cook them for quite a long time to really concentrate their shroomy goodness. A healthy glug of red wine added to the richness of the dish further. We went for a very palatable Aussie McGuigan Bin No. 736 Shiraz Viognier blend, and a fine accompaniment it was too.

A dish this hearty and tasty does not need much on the side dishes and some simple stir fried savoy cabbage with a touch of soy sauce was great. Thanks to signing up with Abel & Cole, I think that more tasty River Cottage veg dishes are in our future.
Posted by Richard Edwards at 08:13