In December, I made the fantastic discovery that The Oar House website has a delicious-looking selection of recipes. Tonight, I tried one out - or a variant thereof, at least - and, whilst not up to the standard of the restaurant itself (a chef issue, I fancy), it was indeed delicious. Errors on my part not withstanding, it was also pretty easy. 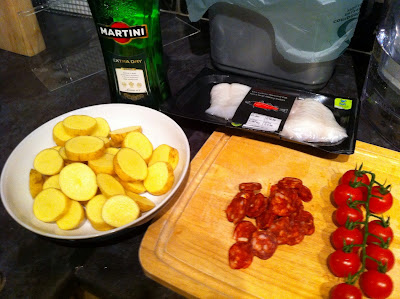 The recipe selected was Haddock, chorizo and new potatoes, which appealed to me both because I love fish, chorizo and potatoes but also because it is done all in one pot! Due to availability when shopping, I made it with line-caught cod rather than haddock and, for matters of taste, switched the dry sherry for dry Martini. (Next time, I might use wine.)

Cooking this was easy but, at the same time, highlighted some of my failings (or "room for improvement") as a chef; one feature of the Oar House recipe is a certain absence of key instructions that an experienced chef would know, such as pan selection (it's called a sauté pan for a reason, duh!) and temperature.

First, fry the chorizo for a couple of minutes in the oil - use a sauté pan (or frying pan with a lid) rather than a saucepan (as I did). Add the spuds and 3 tbsp sherry/martini/wine, put the lid on and cook for 10-15 mins. Stir occasionally to prevent burning. (I was a bit late realising and had to replace a few bits of burnt chorizo. My pan selection also added a few extra minutes before the potatoes were tender. 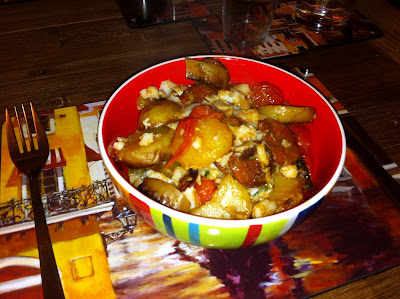 Once the potatoes are tender, add the tomatoes and parsley and lay the fish on top, add another tbsp sherry/martini/wine then cover and cook for 5 mins. Because of my pan selection, this was not long enough, so I ended up flaking in the fish and giving it a couple of extra minutes to heat properly. (That was ultimate the plan for serving, anyway.)

Despite the hiccups along the way, it was delicious. Perhaps best of all, I am pretty sure that I could do it better next time!
Posted by Richard Edwards at 08:54