One of the great things about going to International conferences is seeing some of the work that goes on "across The Pond". This can be both inspiring and depressing - the scale of some of the work is fantastic but, at the same time, it's the sort of stuff that can only happen on a generous budget. 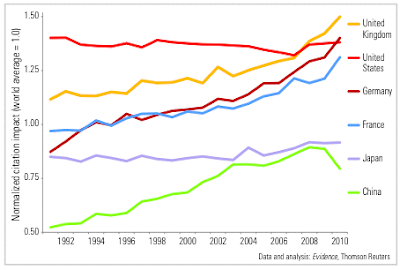 In the UK, we typically have a smaller pot to play with but that doesn't mean that we don't do good stuff. Indeed, a recent Science news piece highlights two recent studies that show (1) the UK “"attracts more citations per pound spent in overall research and development than any other country", and (2) the UK now tops the charts when "ranked by average number of citations" (see figure). Above and beyond this, some of my beleaguered colleagues should also take heart that "The Thomson Reuters report says that ... biological sciences are the strongest area of U.K. research".

It's easy to get depressed with all the budget cuts but hopefully this will inspire us to keep "punching above our weight". (Or, better still, encourage more funding for what should be a source of national pride.)

(By the way, this image was grabbed from the PDF using iAnnotate on my iPad - a great App whose praises I must later sing.)
Posted by Richard Edwards at 09:09