Last night was the first tasting for the university wine club. The theme was "New vs Old Spain" and we "tasted" (drank!) three whites and three reds. When I think of Spanish wine, I always think of a red Rioja, which is probably my favourite type of wine - I certainly don't remember having a bad one.

One of the good things about attending the wine club is that you get to try things that you wouldn't normally. In this case, it was three Spanish whites, including a White Rioja. I can't say that I will be having any of them again (one tasted like sherry (yuk!), one smelt like cat pee, and (the nice) one was only available in Spain) but it was good to try them. 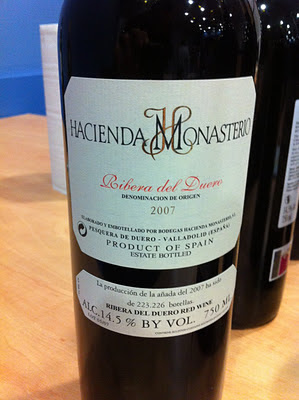 The reds were more to my taste, including a rather nice Rioja from the Muga winery. Wine of the night (for me), however, went to the Ribera del Duero from Hacienda Monasterio. This one was a bit above my usual price range, at about £30 a bottle - one of the other great things about the tastings. Really good, though. It's still above my price range but I'll definitely remember it for special occasions!

Posted by Richard Edwards at 20:54

Email ThisBlogThis!Share to TwitterShare to FacebookShare to Pinterest
Tags: wine