The solution to extremism is not more extremism

Like all civilised beings, I was dismayed (if not shocked) at the recent events in Brussels. Until our world is rid of religious extremism, I fear that such terrorist atrocities will always be a part of it. However, the way to combat religious extremism is not political extremism.

Terrible as these events were, the damage and death toll are slight compared to a natural disaster, or even a bad plane crash. Just as we do not stop flying, or living in earthquake zones, neither should we go for a Trumpesque (albeit temporary) ban on muslim immigrants nor a right-wing blame-immigrants-for-everything backlash against refugees.

Always good, on days like this, to remind everyone that the guys blowing up Brussels are THE PEOPLE THE REFUGEES ARE RUNNING AWAY FROM

Of course, some people missed the point, retorting that the terrorists were home-grown extremists - even more reason not to blame the refugees - or that not all of them are fleeing ISIS. To me, though, the sentiment is sound. Caitlin is not talking about those specific guys, but rather the kind of regressive human who sees indiscriminate violence (whether motivated by religious or political ideologies) as an acceptable means to their desired end.

More recently, the poet Brian Bilston summed it up even better, with the preface:

Please bear with it. 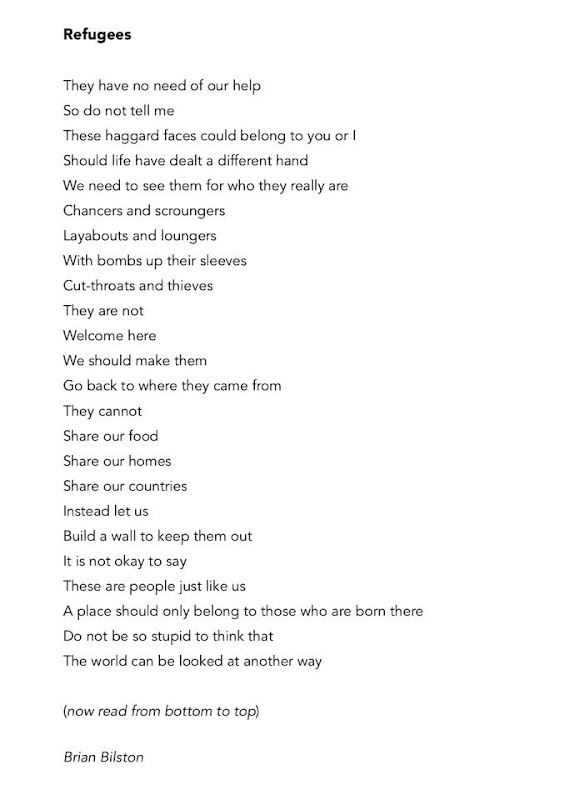 If the terrorists succeed in making us lose our humanity and sink to their level, they win. If we live in a climate of fear due to an inflated sense of the risk posed by a scattering of abhorrent individuals, they win. Surely, a civilised society can do better than that?

Posted by Richard Edwards at 15:01