The power of positive incentives for healthy behaviour

There’s no real secret to a long and healthy life: eat a balanced diet with plenty of fresh fruit and veg (but eat your fruit, don’t drink it), However, despite the fact that we all know this deep down, knowing it and doing it are two different things.

Unfortunately, most of the messages we get, and tactics used to modify behaviour, focus on getting us to avoid the stuff we are not supposed to do. Cigarette and alcohol is restricted, taxed and comes with warning labels. Tasty unhealthy foods have “traffic lights” telling you how much bad stuff there is in there (sugar, salt, fat) and what it corresponds to as a percentage of your daily recommendation. There is regular talk of whether there should be a sugar tax or a fat tax.

If you are anything like me, these negative messages are only of so much use. I don’t smoke, and never have (and never will), so that one is easy to obey. The other stuff, however, is generally at its most appealing when my will power is also at its lowest. When I eat unhealthy food it is usually because it scores high on combined taste/convenience, not because I have consciously sought it out.

A tax would probably help in this respect, but what would really help would be something to encourage eating of good stuff, which tends to have the double whammy of being expensive and more effort to cook.

Exercise is the same. We all know we should do it but it’s not always easy to find the motivation. One step (no pun intended) is to know how much you are doing, just as one step to a healthy diet is labelling food. But this only goes so far.

For example, I got a FitBit for Christmas, which was great for seeing how much general exercise I was getting. I walk to work and back so thought that I was probably doing OK. However, my daily step counts for January and February paint a different picture:

The good week in February was our holiday in Tasmania, which featured quite a lot of walking. This included, I still did not have a single week where I hit the 10k goal every day. (Although I was better than the 3.5k-5k average.)

The difference? I’d like to say that I just decided to be more active. I have taken up running again more seriously, which is part of the answer - but only a small part. The main difference is this: 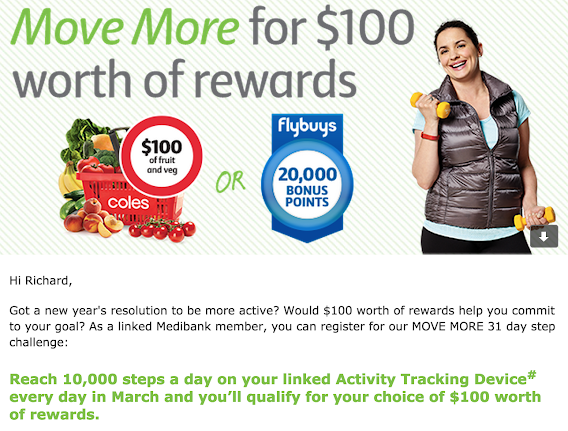 That extra incentive was enough to actually cause a change in behaviour. There weren’t actually that many times that I needed to pick up extra steps at the end of the day - about four times I went for a short evening stroll - but I did change my behaviour to make more trips to the shops on foot and things like that and routinely hit the 10,000 step target. It also served as extra motivation for running.

The annoying thing is obviously 28th March when I lost track of time and midnight came before I’d made the target. It was enough to miss out on the $100 (although I should get $10 credit for 10 consecutive days) - and make me rather cross with myself - but not enough to avoid developing the habit. And, at the end of the day, I think it’s really all about building habits. The incentive has run out but I still went for a stroll on Wednesday to get the extra 700 steps before bed. (Today is a very rainy day off work, which will be the real test!)

The best way to avoid the bad stuff is to replace it with good habits. Rather than taxing sugar or fat, I think that it would be much better to subsidise fresh fruit and veg. Or, if you are going to tax sugar and fat, then use the revenue to subsidise the good stuff. Or give out vouchers for it. Anything, really, to give us more carrots (literally!) and fewer sticks.

Posted by Richard Edwards at 11:54