The Saturday before last, we were with friends watching England experience their first (but least upsetting) sporting defeat of the past couple of weeks: a tight one point Rugby Union loss to the All Blacks. Despite the defeat, it was a good game and made all the more enjoyable by a fine array of beverages. 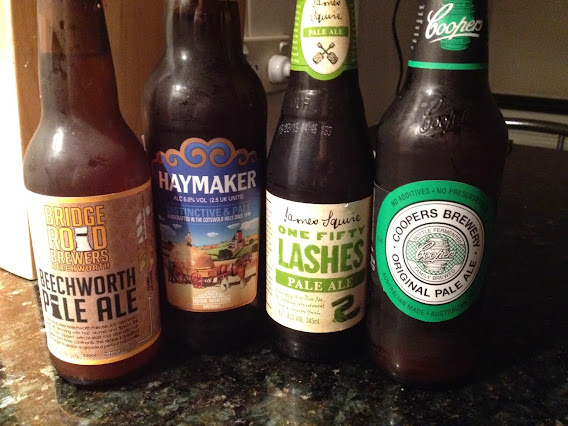 In fact, the disappointment of the rugby was over-shadowed by the impromptu pale ale beer tasting that accompanied it. The line up is above, and started with Haymaker, an English import from Hook Norton in the Cotswolds. It was quite strong for a pale ale, at 5% alcohol, but packed full of flavour. Yum.

After that it was on to the Aussie beers. We’d brought some Beechworth pale ale from Bridge Road Brewery, which was good and fruity with a quite hoppy taste. Another craft brewery to add to my increasing watchlist and another fine pale ale to add to the existing favourites. One fifty lashes from James Squire is already on that list, being one of the first decent* beers that I discovered in Australia. (*To my taste.)

Only the final beer let the side down: Coopers was by far and away the worst and, after the others, I have nothing good to say about it. If only it could have been replaced with Fat Yak from Matilda Bay, it would have been a first class collection!

Posted by Richard Edwards at 19:46