Our recent holiday in Tasmania was fantastic but did not start entirely well.

I checked us in online, not long after check-in opened. I thought that our allocated seats might have been over the wing, spoiling the view, so I decided to check whether anything better was on offer. There were not many available seats left but there were a couple of window/middle pairs nearer the front of the plane, in row 9 on the left and somewhere nearby on the right. I figured that during the afternoon flight time the sun would be in the west and we would mostly be heading south, so the left side was probably better. This also had a better chance of coastal views, I thought. Seats 9A & 9B selected. Checked in. Job done.

Later, we became interested in what type of plane it was. (I can’t really remember why: it might have been curiosity as to the number of rows and which ones might therefore be over the wing.) Googling the route, I came across the Seat Guru entry for the likely plane (the one flying the route that day) and I took a quick look. And horror! 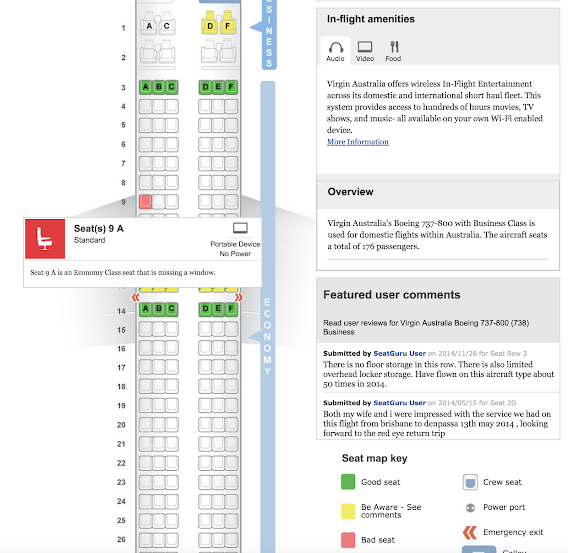 Seat 9A is an Economy Class seat that is missing a window.

For reasons that still mystify me, the one window seat on the whole fecking plane without a window was the one that I had so carefully selected for my wife. WTF, Virgin‽ (Actually, that should be "WTF, Boeing‽" - Qantas planes are the same.)

I always check seat guru for long haul flights and big planes but it never even occurred to me that there could be such a crappy seat on small plane like a Boeing 737-800. (Fortunately, my wife was very gracious and laughed about, so my grumpiness on discovery did not last too long!) Lesson learnt.

Always check Seat Guru before choosing your seat. (It probably gives a better indication of the wing rows too!)

Posted by Richard Edwards at 12:00